When I was first asked to write about my relationship with Walt Reno, I asked myself, "What Can I Say?" It's simple, he was a very, very, very good friend. For a long time.

I first met Walt Reno, when I was in High School in the tenth grade. He attended Roosevelt and I was going to North High. Both in Des Moines. Walt was a member of the Roosevelt swimming Team and I swam for North. Although he swam breaststroke and I swam freestyle, we never competed against each other, one on one, but did compete in Medley relay races. We hit it off right away and talked etc. But who could not be friendly with Walt and his laid back personality? All through High School I would see him at the local and State High School swimming meets. In 1943 my parents moved to Windsor Heights, out of the North District and I could have transferred to Roosevelt. Walt called me weekly, trying to get me to transfer, but I held out and stayed at North High. We both went into the Navy at about the same time, at the height of World War Two. After completing our Service hitch in the Navy, we both went to Iowa University in September, 1946, as Freshmen. And we were really fresh. Walt, joined Alpha Tau Omega Fraternity and I joined Phi Gamma Delta. We were both on the University of Iowa swimming Team and in December of that year we went to Fort Lauderdale, Florida for the National Collegiate East/West Christmas meet at the Hall of Fame Swimming Pool. In those days the team drove to Florida. Walt, Larry Larrimore, Dick Maine, (both former Roosevelt High School swimming stars) and myself. All in one car. Walt was my roommate. What a great time, fun and laughs. That December, with Dick Maine swimming backstroke, Walt Reno swimming Breaststroke and yours truly swimming anchor, freestyle, we won the Medley relay. First in the U.S.A. After the meet, Walt and I went down to the Ft. Lauderdale, telegraph office and sent telegrams to our Families, letting them know the good news. (NO CELL PHONES in those Days).

We repeated that same trip to Florida in 1947 for the Meet. Those were great days for Walt and Myself. We were also members of the Dolphin Fraternity at Iowa. An honorary swimming fraternity. Each year the Dolphin Fraternity put on a homecoming show at the swimming pool and selected a Dolphin Queen or Homecoming Queen.  Walt, M.C'd the show and I was in charge of the Queens court and selecting the Queen. We both danced in the all Male, Hula Grass skirt dancing line. Hairy leggs and all. It was our first "Show Biz" production.

In the summer of 1947 we got jobs with the Des Moines Recreation and Parks board and were selected as Lifeguards for the Camp Dodge swimming pool. We also taught swimming to Children at the Old East High swimming pool. We repeated those jobs in 1948 and 1949. I had a 1933 Ford V8 Roadster with a rumble seat, painted red and I would pick Walt up every day and we would go to work together. That same old car took us back and forth from Iowa City to Des Moines, many times during our Four years at Iowa U. We graduated together in 1950.

Walt was an already established star when I returned to Des Moines in 1958 to begin my career at KSO. We became hard line competitors for ratings, but never lost sight of our friendship. We worked together on Variety Club Activities. (see picture on Web sight.) I probably talked to him Two or Three times a Month. 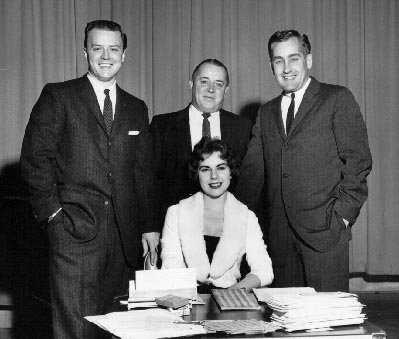 About three weeks before Walt's death, Dic Youngs called me. Dic and I talk often. Somehow the conversation got around to Walt. After hanging up something said to me. "Call Walt," I did. A friend answered and said he was napping but would call me back. About an hour later, that friendly, warm Radio voice called and said, "Hello-Daddy-O," it was Walt. Just the same. Never changing. We had a great talk. We talked and talked for about an hour. He indicated that he had to have an operation, but did not think it was serious. I had just returned home from Mayo Clinic so I knew his concern, although hidden, about his health. He told me he would call me after the Operation. It never happened.

The friendship between Walt Reno and Dick Vance goes back over 50 years. From High School, Sports Competition, double dating to Business competition. Highs and Lows. Changes in Lifestyle. One thing does not change. FRIENDSHIP. And Oh Yes, one other thing did not change. WALT RENO. A great Guy. He will be missed by both family and friends. He will be especially missed by Dick Vance.