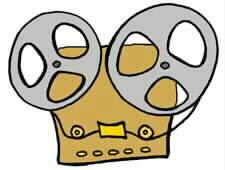 EBS Tests: In the mid 60's the FCC replaced the obsolete Conelrad system with the Emergency Broadcast System, or EBS. Broadcast stations were and still are required to run scheduled tests of the system.

This one never made the air, but is an EBS spoof done by Alan Mitchell at KASI, Ames in the mid 60's. The standing joke was that the time salesmen would be willing to sell anything, including the EBS tests. The name of the business has been beeped out for obvious reasons.

Russ Van Dyke has a slip of the tougue on a story about Richard Nixon.

Frog in the Throat: Can anybody identify the KRNT newsman from the 60s?

KSO East High Fire Hoax - 1962 Fake news! - This is a very rare recording. KSO's Johnny Midnight and Ron Edwards were the victims of this 1962 hoax. Coverage of a fire that nevery happened was reported by a fake Ron Edwards. The recording is very distorted and the first report is missing, but one can still get the gist of it. The reason Johnny was a little hesitant after the third report was that the pranksters used Johnny's real name as the name of the witness that was interviewed and he probably wasn't quite believing his ears. The last report was topped off by the playing of a KIOA mobile news jingle. Here's a higher quality copy of the only KIOA jingle every plalyed on KSO.  Parties involved remain nameless, even to this day.

KIOA Pam Series 17 march jingle that will make you chuckle. We are pretty sure that this jingle was used as a bed for the KIOA sign-on in the 1960's and that Peter McLane read the script. One has visions of little "Good Guys" with antennas on their heads, dancing around and getting on a treadmill to power up the 10,000 watt 940Khz transmitter.

"We're on the air!" One morning in the early 70's, during the Girls Basketball Tournament, KRNT's Steve Gibbons made a "crack of dawn" call to sportscaster Pete Taylor to ask him the pronunciation for a small town team. Pete answered, but the response wasn't what Gibbons expected. Pete Taylor, the Voice of the Cyclones, passed away March 5, 2003.  Steve Gibbons passed away in the Fall of 2016.  This recording was played at his funeral.

"Wild Child" Hal Moore was one of the KSO jocks in the early 60's, starting out while attending Drake University. It was common for the jocks to do production cuts for each other. Hal does a Rick Mann $4.37 Classic intro.

CW McCall produced a short jock lineup song for Great Country KSO in 1974. The people named in the song represent the first lineup for the brand new country format. The "CW McCall" character was actually William "Billy" Fries - is the voice on the albums and the person in the TV apearances....(but not the Old Home commercials) . Billy later went on to become the mayor of Ouray, Colorado. Chip Davis was involved in the jingle production and also involved in the CW McCall project, then later formed Mannheim Steamroller. See CW McCall Page.

"Radio's Cup of Hot Chocolate" In the early 1960's, the Radio Advertising Bureau commissioned satirist Stan Freeburg to produce some creative spots promoting the virtues of radio. This cut is the "textbook classic" and has been used as an example in advertising classes in the university classroom for many years.

NBC Chimes Love Song. WHO was an affiliate of the network for many decades starting with the late 20's. This novelty song used the melody of the NBC chimes for the words "I love you." The lyrics are cute. The name of the band and exact date are unknown, but it was probably recorded sometime in the 30's

KRNT production outtake reel. very station has an outtake reel. This one features the likes of Van Harden, possibly John Leifheit, Robbie Vorhaus, Barb Chase, Del Hull, Ray Dennis, Scott Huskey and others. There was more on the tape, but some of it was a little rank for this wholesome website. Courtesy of former KRNT/KRNT continuity writer (and GDF Carpet commercial talent) Barb Chase Rybacki. Picture of Barb as a teenager wearing a KIOA Good Guy Sweatshirt.

The $10 Jingle Package - KSO . In the 50's and for several years later, there was an outfit called "The Quality Jingle Company" that sold jingles for as low as $10 for the whole package. An exhibit on the Reel Radio Top-40 Repository site shows that they were still selling packages for as low as $15 in 1970. We don't know if KSO ever put these on the air, but they were probably worth the small price just for a good laugh. Courtesy of Dave Johnston.

"Away with a Stranger" Christmas Novelty on KSO - John Fitzgerald and Perry St. John.

Bob Cook -- We Heard That Voice - profile and audio.